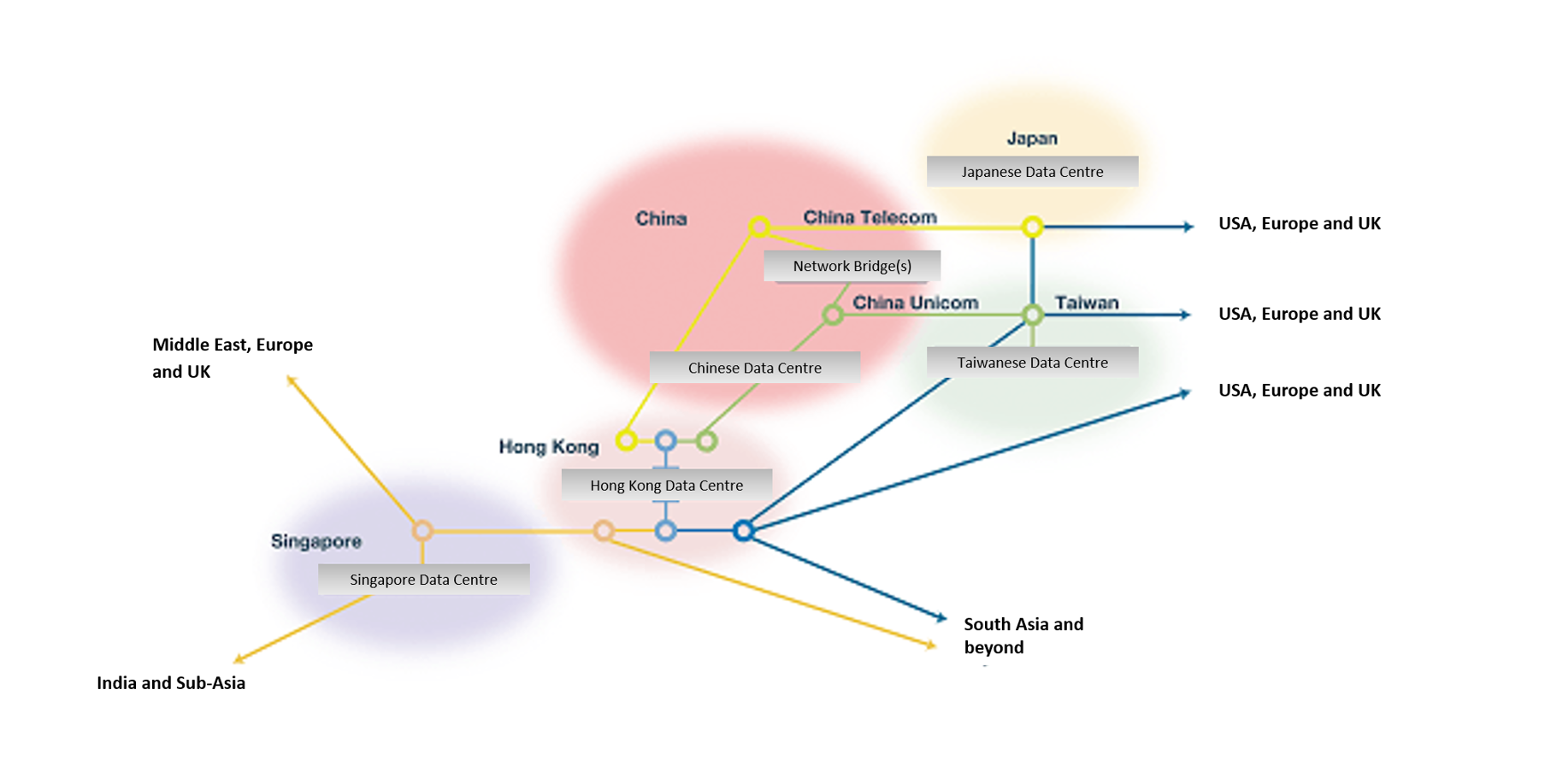 The internet in China structure checklist

The workings of the internet in China can be better understood in the context of traffic flow around the Internet in Asia and the rest of the world.

This option is only available if you have a Chinese company and ICP certification.

Many Chinese companies offer platform services in China, e.g. TMall Global, these services are hosted in Hong Kong with listing links on their Chinese platforms. In TMall Global example, the list is call “Trading without borders”

Internet in China links to the rest of the world

The internet traffic traveling from mainland China with a destination somewhere outside mainland China, except Hong Kong, is routed through Japan or Taiwan.

Once the traffic reaches Japan or Taiwan the internet traffic is split;

Internet in China links to and from Hong Kong

The internet costs between mainland China and Hong Kong are high ($us100 / 1 MB / pm). A lot of the traffic from and to mainland China to Hong Kong is slowly Routed through Japan and Taiwan.

If you are using a Hong Kong internet hosting service, make sure it is connecting to China directly. It is faster and more cost-effective to host your internet services in Japan or Taiwan, or both – please see GEO DNS.

Please note the Chinese platform services, e.g., QQ mail and Tmall Global, are hosted in Hong Kong and have a high-speed connection to mainland China and the rest of the world.

Internet in Hong Kong links to Rest of World

There are Hong Kong suppliers that Route traffic from Europe through the Middle East, which is the fastest path.

Before selecting a Hong Kong, internet hosting service check the network Routing by the fastest paths both for mainland China and the rest of the world.

Internet in China links from the rest of the world

You would think this is straightforward that internet traffic is routed to mainland China back in the same way it leaves China. Often not the case.

We have seen some cases where the Routing travels from Hong Kong to the USA back to Taiwan, Japan, and then mainland China.

As with Hong Kong Routing check your service provider’s internet traffic routing before using their services.

With the above, you would think this is straightforward. Like with many internet companies worldwide, this is not the case.

Within mainland China, there are three internet providers. All government-owned and controlled. These companies have been very successful in bringing mainland China on-line over the last ten years.

There are historical reasons for this. China Telecom was originally the only telecom company in China. Split into two companies over twenty years ago. To start with China Telecom was north of the Yangtze River and China Unicom to the south of the river.

China Mobile was added later as the demand for mobile services grow over ten years ago.

The solution, connect internet services to all three internet suppliers with the GEO DNS managing traffic between the internet networks.

In recent years, the Chinese telecom suppliers have started using their direct corrections to the rest of the world. The approach has speeded up traffic to Europa by 10% to 20%. They are still routing worldwide along the same paths as the internet.

E.g. China telecom to Europa travels between mainland China directly to Germany before the internet traffic travels around Europa. The path through the USA over to the UK and into Germany is still the same.